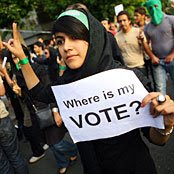 I have long felt that the world would be a less violent place if women were in charge. And I certainly do not mean this post to be a rant on men. It is just an opportunity to look at things from a different perspective. Most women are not apt to kill when they know exactly what it takes to reproduce. In fact, it's rare when women kill. It usually makes headlines. There are many historical women figures that that were also violent creatures, of course. The world has a few right now. But the reality is that in the 20th century alone, the human race killed over one hundred million of their own species. Think about that for a moment. One hundred million! Most were killed in wars, totalitarian regimes bent on eliminating dissent, and various other means of annihilation. One common thread? Well, let's just say it wasn't women. If I were an alien, this planet would freak me out.

So now that Iran's women are exerting their presence, what will that mean to the world? Put another way, if all the women came together throughout the world, what would that look like? I, for one, would love to see a massive, grass-roots women's movement. Not against men, but in favor of life. I believe in grass-root movements, seemingly the only thing working right now. We could solve the world's problems instead of destroying it, take care of our children, elderly, and less fortunate, work on saving our ecosystems, put effort into clean fuel sources. March to a different drum. Insist our governments take us seriously.

It can be done. It was done last November, and it's being done in Iran right now. People, men and women, taking some control of their lives, their future. Old regimes, not paying attention to what it's people are telling it, need to move on and make way for a new understanding. A planet united in it's desire for equality, for all people, in all countries, throughout the world. What would it look like if the entire human race understood the dire consequences we face, and worked together to solve these problems?

Let's look at the planet as One, because we really are.
Posted by Nancy at 7:33 AM

A very thought-provoking post. Makes me think of what my mother always used to say, "Why can't we all just get along?" I don't want to bash men, either, but I do believe there would be less wars (if any) if all countries were run by women! Killing is not the answer.

This is very eye opening. The only thing that comes to my mind is when I think about how nasty women get in competition. We get really passive aggressive and extremely violent, in a non-violent way.

Anna - Yes, we are very difficult at times, but rarely lethal.

I am very hopeful. A new age is being birthed, and I think it will be an age of women - once again - in balance with men. Within our own selves we have been polarized for centuries - millennia - and we don't know how to act. I feel authenticity growing all around me, and in me too. I think the "Obama effect" along with many other current trends will keep us moving forward. But it's going to be a long hard struggle even so.

Ruth - I totally agree. It will be a hard slog, but I think it is in the works.

We can only keep sending our prayers and energies. I would love to see this work. And now we're off to intercept the N. Korean ship....

I have always said that if women ran the world there would be no wars - we would just make you feel really, really bad for inappropriate behavior.

Look how far woman have come - women were beaten for picketing for the vote - shoved into mental institutions and "owned" by, first their fathers, then their husbands.

The struggle goes on - but we are making headway. the ONE thing woman MUST do is educate their sons as to the value and equality of women- that's the perfect place to start.

Oops.. almost fell off my soap box. Sorry... but you really hit a nerve with this post!

Good Cook - Great point. It starts at home. Especially the father figure. He points the way for his sons.

I have often said many times that if we lived in a Matriarchy we would live in a much more peaceful world. I think if nothing else, that women couldn't lead any worse than our male dominated world.

luksky - I think at least having more female input would go a long way. In fact, I read where some of the big banks are doing just that - realizing they have too much testosterone and not enough estrogen.

Ahhh, but what would happen when all of the female leaders of the world had PMS at the same time....?

Jeff - Good point, but at least it usually is not lethal - just crabby.

On second thought, how about if we put women in charge of all wars. If they all don't agree - no war. We all know how that will end...

Very, very well said....and I totally agree. Women rule...like you, nothing again men, but we are the creators of life. The nurturers, the hand that rocks the cradle, etc. Perhaps why they say that behind every good man is a great woman. Working together despite differences in gender, religion, race, etc., is our key to success. We are all, after all, part of the HUMAN race.

Momma - I do think it is harder for us to take life when we know how hard it is to produce, don't you? And yes, we are all part of the HUMAN race. Well said.

Hey, this planet freaks me out and I'm from here.
Seriously, I agree with Ruth concerning an age of women. It's about time that came back, only this time, in balance with in balance with men. Ying and Yang must be equal.

Fantastic post. So what do we do? Can we do it alongside the men or do we have to over take them? Or a little of both.

Another great and thought provoking post! Always a treat to stop here. I agree with you on the women running the world. I work in the court system and I have to say, the very best judges that accomplish the most in the most efficient way have always been women. I find they get in there and get the job done. Women are multi-faceted and talented in just life, primary responsibilities for taking care of the family and also being working women out in the world supporting their families monetarily. Women look at the big picture and figured out how to make it all work out!
Women Rule! LOL
Men are great too...I love them...I think women are just smarter! LOL
Have a Happy Day!

Leah - A balance! Yes, finally a balance would be nice.

Breeze - I think to keep your eyes and ears open for any and all opportunities to support women's movements in any form that is enlightened, and balanced. There are many grass roots movements in the works right now. It seems to be the only way to get things done for the people. Many, many men are also ready to have a different world. We need to include them at every opportunity. But there is power in numbers, and women have numbers.

Let us know when your first meeting is...

Chic - We have a very large stake in what happens, but have lacked a bit on the power part.

i think is about time we all came together to make the world a better place. I think it will start grassroots, if it does. if we could only agree on how to do it. have a great weekend!

Brian - You are so right.

I would love to think of my kids, and future grandkids as living in a time of peace.. when the world and its ways have finally clicked. I'm not keeping my fingers crossed but it sure would be nice.

Hilary - I pray for the same thing.

What an interesting post! Kinda reminds me of a book i'm reading right now. Why Mars and Venus Collide by John Gray, Ph.D. He says it's all about hormones. When a man comes home from a stressful day, it's ok for him to ignore his wife because it's a natural way for him to replenish his testosterone levels!! He says,
" It's not that he's just not into you, but he needs to fulfill a biological need". Give me a break!! I'd like to bottle up all of the testosterone in the world and bury it in the desert. Then, we would have peace! lol

Marguerite - He needs to replenish his testosterone by ignoring his wife? Hmmm I would be interested in hearing what data the writer used to base those findings on. (?)

We have to remeber John Gray is from Mars not Venus. LOL

Excellent post. I recently did some research on the Womens' Movement going back to the early 1800's. We ain't done yet, baby!

“If the first woman God ever made was strong enough to turn
the world upside down all alone, these women together ought
to be able to turn it back, and get it right side up again!
And now they is asking to do it, the men better let them.”
–Sojourner Truth (1797–1883)

Linda - You "got" my message in this post! It is not against men, it is for life, with women doing what they do best - bringing on change without violence.

I believe New Zealand was the first country to allow women the right to vote in or around the 1820's. It's hard to believe how long it took us to catch up with them.
Women are certainly very motherly, so I'm sure instead of blowing up other countries we would send them a fruit basket and try to make amends, that is of course, unless they messed with our children, our people. Then the other countries would have to beware. Angry mothers are the scariest.

Phoebe - Oh you know it! I call them the Mother Tigers, and beware, no doubt!

First, understand that I am old, and half crazy......
But I have always contended that if women had the budget of the US military, no babies would starve or go without shoes.....especially really cute shoes...
Thank you for indulging my sense of the absurd.

Emom - Nothing absurd about that at all!