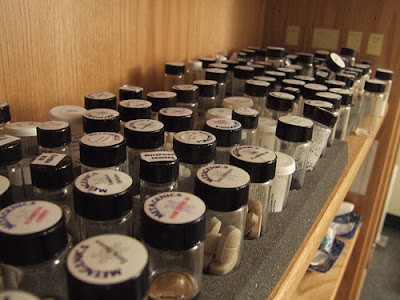 So many of us ask for answers to our questions, but how often do we listen for the answers?

My younger daughter has been struggling with what she wants to do for post-graduate studies. She is leaning toward nursing school, and has started the process to begin the pre-requisites to apply. But she isn't totally sure that she doesn't want to go into Naturopathic Medicine, of which there is a really good school in Portland. It is exactly like entering medical school, in terms of curriculum and cost. Not a decision to make unless one is fully engaged.

Yesterday she was buying some veggies from a fruit and vegetable stand when the man behind the counter said he was a clairvoyant/psychic and was picking up on her "frequencies." He said he saw her doing something with healing, children, and plants. He saw plant starts, but didn't know what kind. He also said her father's father was around her.

Now for someone to say these things out of the blue is odd, but what is even more odd is that her grandfather passed away a year ago and was a doctor who, while being an Internist, believed in preventative care to the extreme. This daughter is very interested in plants and sustainable gardening, asking to attend the Master Gardner program as a recent graduation gift. She took this as a possible answer to her question - nursing school or naturopathic medicine.

My point is that we often ask questions to difficult questions, but don't always pay attention when the answers come our way. We expect them to come verbally, or in some way definitive. I think we need to pay attention to subtle cues and gentle reminders that often come to us in obscure ways. Whether or not you believe this man to be a psychic, he gave her information that she needed. Her desire to heal and her love of plants can be combined in a naturopathic way, which is something I see for the future as more and more people become aware of the inherent risks of a pharma-based medical system.

Which makes me wonder how many of my own questions could be answered if only I were paying attention?
Posted by Nancy at 8:38 AM

Oh, you are very wise. The universe answers us, of course, if we pay attention. Your daughter knows her answer as she listens deeply. Blessings on her as she shows up and pays attention. Great post- thanks.

She'll make up her mind when everything feels right. They have to find their own way, their own passion. We can only provide motivationa and support.

You're so right about listening. Your daughter is wise to listen to that man regardless of belief in the "psychic" factor. That answer came to her when she needed it. Thanks for this post.

I agree completely. So often we spend all our time and energy looking for an answer to come in a specific form and totally miss all the subtle responses. Your daughter is fortunate that she is open to the more obscure answers.

I am covered in goosebumps! Covered. And she was so present and open that the message was received. Goosebumps.

Wow. You are so right, sometimes we are so busy doing, we never stop to be and listen.

This reminds me of an old axiom...prayer is TALKING to God. Meditation is LISTENING.

Well said, sometimes the answers are so subtle we overlook them completely.

It's interesting to me that there are many "channelers" in the world that are sending us messages, often without even knowing they are doing so. I am a firm believer in guardian angels who work for our greater good, if we are willing to listen, and often give us clues if we will tune in to them. This was, to me, a wonderful illustration of this. Thanks so much for sharing it.

My sister has a naturopathic practice. Small world (smile). Of course, she drives me nuts with all her remedies (wink)..

Yes, sometimes it pays to listen.

Beautiful. I knew I popped over here for a reason.

How wonderful that she recognized the answer when she heard it. We could all do with a little more listening. Guidance comes in many ways.

so true. I love my Bach flower remedies and wouldn't be without them. Sometimes we don't see something till it hits us in the face. The other day L and I were out and about in the mountains and we saw something move in the grass and shrubbery alongside the road. We stopped and saw a deer, then we saw another one and another. There were 8 altogether. If one hadn't moved, we wouldn't have seen it. How many more things are there that we just don't see because we don't look or listen properly.
Blessings, Star

insightful reflections,
Time to pause, listen, and have some
quality time!

That is just wonderful that she encountered this man. I have had several similar experiences that have pointed me in a certain direction. We need more Naturopathic doctors and I think that she would be perfect!

Exactly, Nancy! We all need to be aware of the loving guidance all around us.
I am very excited for your daughter, feels wonderful to me. ♥

Difficult to pay attention when one is thrust in so many directions as we are at this point in time. (Good excuse, huh?) Sounds like a strong message to your daughter. How exciting.

well said. answers don't always come in "prescribed" methods. you can call him a psychic or just someone that God used to deliver a message. either way - her reception to it seems to be the right one.

Paying attention is the key to so much. Show up. Attend. The Universe has so much to teach us.

You're so right, the answers, the inspiration, often comes in subtle ways and as you said, "I think we need to pay attention to subtle cues and gentle reminders that often come to us in obscure ways."

Sounds to me like your daughter was getting a message relayed from her grandfather. Our guidance and inspiration often comes from beyond--the other side--and that man was only a tool for the message to get through.

I'm sure she'll make the right choice, when the time is right. She also has a wise mother to guide her, :-) along with her spirit guides and angels...which includes grandfathers. :-)

nice post. as odd as it is ...i think there was a message there...listening intently!

You are so right Nancy, i know i've missed many things myself for not paying attention. i'm getting better though, and that's a good thing, the best we can all hope for!
Good luck to your daughter!

Good post Nancy!! if we were blind our hearing would be 20/20!! lol.. as it stands now what LOOKS good to us humans is more important than what REALLY is!

Your post here reminds me of one of my favourite aphorisms: fortune favours the prepared mind. In other words, it helps to pay attention.

I love these stories. It is like the universe confirming what you suspected all along.

Interesting. I was reading an article the other day about how pharmaceuticals are going back to the original "plant based" medicines that have been around -- some of them -- for thousands of years. It sounds as if your daughter's guardian angel was giving her a little shove in the right direction.

That was really cool. I'm glad that it gave your daughter some direction. Sounds like the man was dead on with his "feelings". I wouldn't mind running into him myself!

You are so right!! I am guilty of not pay enough attention!! I am working on this. Your daughter has her answers!!

great great post, nancy - wonderful story - don't you love it when those seemingly little "nothings" actually are the that final little bit of "some"thing we needed for confirmation - and yes, we must all listen to ALL the voices around us and in us!!

I believe the whole world is an ongoing, 24-hour, three-D, animated tarot reading. We can divine wisdom from everything, if we just pay attention.

So much magic swirls around your family. Wow!!

Tell grandpa hello for me, OK?

This is what the heart is designed for - to serve as a compass for the spirit, regardless of how one defines the word. The mind has terrible limitations in doing that sort of thing. Reason isn't everything and it appears the message was exactly the right one for your daughter. What a wonderful story and I do think that in order for humanity's story to continue we need to spend less time being reasonable. It hasn't worked too well recently.

I often think I have the same problem making decisions as I have with making scones, I overwork the mixture. Hopefully one day I will become more open to the answers the universe provides.

Nancy, this is a post I will return to. Your daughter's experience was - what shall I call it? - extraordinary? No. Unusual? Maybe. Doesn't really matter what I want to call it, but the important thing is that it happened and she listened. It's one of those things that, after it's happened, you think 'of course. That's the way it should be.'

Listening and paying attention are things I forget to do, find hard to do. Even though I'm not in a frantic activity mode (well except for Typical Canadian Days) I just sometimes sail right past things I should be listening to and being mindful of. Thank you for this thoughtful, articulate reminder that we need to pay attention. I do love your writing, your point of view and the things you choose to discuss.