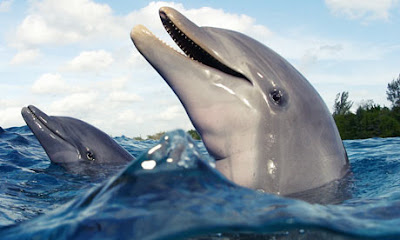 At the Institute for Marine Mammal Studies in Mississippi, Kelly the dolphin has built up quite a reputation. All the dolphins at the institute are trained to hold on to any litter that falls into their pools until they see a trainer, when they can trade the litter for fish. In this way, the dolphins help to keep their pools clean.


Kelly has taken this task one step further. When people drop paper into the water she hides it under a rock at the bottom of the pool. The next time a trainer passes, she goes down to the rock and tears off a piece of  the paper to give to the trainer. After a fish reward, she goes back down, tears off another piece of paper, gets another fish, and so on. This behavior is interesting because it shows that Kelly has a sense of the future and delays gratification. She has realized that a big piece of paper gets the same reward as a small piece and so delivers only small pieces to keep the extra food coming. She has, in effect, trained the humans.


Her cunning has not stopped there. One day, when a gull flew into her pool, she grabbed it, waited for the trainers and then gave it to them. It was a large bird so the trainers gave her lots of fish. This seemed to give Kelly a new idea. The next time she was fed, instead of eating the last fish, she took it to the bottom of the pool and hid it under the rock where she had been hiding the paper. When no trainers were present, she brought the fish to the surface and used it to lure the gulls, which she would catch and get even more fish. After mastering this lucrative strategy, she taught her calf, who taught other calves, and so gull-baiting has become a hot game among the dolphins.

Dolphins have brains five times larger for their body size, when compared to another animal of similar size, which is a more important indicator of intelligence than size alone. This is second only to the human being, which has a brain seven times larger for their body size, on average. Dolphin brains are intricate, with a neocortex more highly convoluted than our own. Folds increase volume in the cortex and aid in the ability of brain cells to interconnect with each other - strongly linked to human intelligence, and structured to allow for self-awareness and the processing of complex emotions. 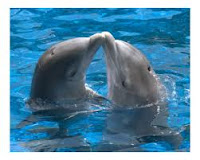 Behavioral studies have suggested dolphins, especially Bottlenose dolphins have distinct personalities, a strong sense of self, and can think about the future. They are able to recognize themselves in a mirror and use it to inspect various parts of their bodies - an ability thought only to great apes and humans.

They are cultural animals in that they learn very quickly from each other. Dolphins living off the coast of Western Australia learned to hold sponges over their snouts to protect themselves when searching for spiny fish on the ocean floor.

These are amazingly intelligent creatures worthy of our protection. In fact some scientists are calling for them to be classified as non-human humans. They believe not only should they not be kept in amusement parks or killed for food, but should be afforded extreme protection from fishing - where some 300,000 are killed per year.

And I won't even go into the some of the spiritual beliefs in this post. Suffice it to say these animals may very well be something more than mere humans.

Don't forget to visit Chris to see many other incredible posts - and please, do not miss this one. Also,  leave a comment if you have joined in the celebration so we can visit you, too. Thanks, everyone!
Posted by Nancy at 12:02 AM

I agree absolutely! Th
This is an amazing story of a remarkable animal - but it's sobering in another way, to think that we have treated these almost-humans so badly.
Nancy, I love the variety on your blog. I know I would also love to sit down with you over a meal and see where our converssation went.

They are so beautiful. I'm so very blessed I see dolphins in the wild every day here. I saw 4 this morning before work playing in the waves. Yesterday I saw 8 feeding and playing after work.

so cool...have swam in the wild with them i am a believer...happy oceans day nancy...working on something for here in a little bit...

Fascinating. I am sure they're at least as smart as we are, if not more. Their intelligence may manifest in ways we can't fathom yet.

I have always been a huge fan of the dolphins, so non-human humans - I am all for it:) And sometimes, when you hear all their stories about rescuing humans - perhaps more human than human:):)

Such a great story about a creature that lives in the sea, on World Oceans Day! Happy WOD. I love dolphins too, but I didn't realize they were able to train their trainers. I wonder why I'm surprised.

we're looking out in the universe for more intelligent life when it is right here on our own planet. obviously we won't find it out there if we can't even recognize it here.

How interesting! I've learned something this morning! Happy Oceans Day! I have a post up today, too! ♥

LOL!!! Talk about one really smart dolphin! She definitely knows how to get what she wants! ;o)

Thanks again for sharing your passion with us on World Oceans Day Nancy, it's a wonderful tale!!!

This is beautiful and that is so amazing about Kelly! Dolphins are amazing creatures that can teach us so much. The feeling that you get when you are around them is so incredible, there is much more to them than what is on the surface for sure. Thank you for sharing this and Happy World Oceans Day to you!

Simone @ Doberman's by the Sea said...

Hey thanks for visiting today. What an awesome post-I love dolphins ever since I read the story about the dolphins that saved the Doberman and seeing them in the FL oceans. They are sooo smart. Cheers

Sooo cool!! I did hear about the spiritual side of dolphins. Just remarkable. I only saw them once in the wild when I visited a dock restaurant in St. Augustine.

An awesome post! I love dolphins, too. They are so graceful and intelligent. I once had a pod or dolphins come within arms length of me at Crescent Beach. They stayed awhile...moving with us. Another time...at this same beach, we watched dolphins leap and twirl...our own "sea world" show!!!
Jane (artfully graced)

Kelly the dolphin sounds a real character. Thanks for telling us about her today. I love dolphins and when we were in the US we swam with one at Discovery Cove. It was an amazing experience and one I will never forget.
Happy Oceans Day.
Lindsay

Happy Oceans Day Nancy...I enjoyed reading about the dolphins and links. It's great to bring attention to our oceans.

Oh Nancy, I LOVED this post and I see many of my friends have been by to tell you the same. I had to work, so I'm catching up with all the ocean lovers tonight. I'm so tired and was about ready to call it a night and thought, "go read one more."

So here I am and your stories of Kelly just had me grinning from ear to ear. I see them in the wild here in Florida and when I lived in California would see them surfing the waves. They are such a joy and yep, I would classify them as non-human humans in a heartbeat.

Thank you so much for joining us all to celebrate this most special day. The more we learn and the more we share with others, the better chance our ocean and her inhabitants will have to survive. Since this all has a direct impact on we mere humans, I hope they all pay attention!

You taught me a lot I didn't know and reinforced some things I did, thank you from the bottom of my ocean loving heart!

That was a very cool story.

love dolphins too, even after seeing them sometimes daily, all my life, they never fail to thrill. happy world oceans day nancy!

Once you swim with these magnificent creatureds, you know that everything you have read or heard about them is true. Great post!

I have had several interactions with dolphins thru my life..and have been so enriched and transformed by them in so many ways ..non humn humans...yes I think that is fair to say..but I may go a step further and say possibly more advanced in some ways then us..I now they can communicate with us. beautiful post.

Haven't we long known about what appears to be a natural connection between humans and dolphins... stories of how dolphins will protect a swimmer in trouble.. etc? It's impossible to disregard their intelligence and social nature. Wonderful post, Nancy. Thanks for sharing this.