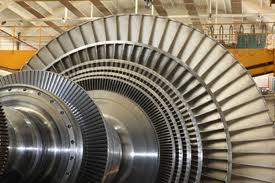 I had one of those moments this week where an old friend's name popped into my head. I knew I needed to call her before I forgot about it, and before I knew it - another year would go by. We had a great conversation, she said her husband had wanted to sell his business and retire, but by some weird circumstance a medium told him to expand it instead of selling it. I got the impression he did that - and maybe now was involved with something she mentioned as being "hot" once people knew about it - a small geothermal turbine that would heat individual homes. At the time I thought that was a great idea... I should mention it to my husband.

So today my husband asked if I had seen the president's plane land (we have a view of the city and landing planes.) Whaaat? Air Force One landed, and I missed it? Yes, he said - he heard that he was here to visit some obscure little company manufacturing some kind of small turbines.

So you tell me - was the President of the United States stopping by our small city to visit with the manufacturer of the same small turbine that my friend had mentioned?

On the other hand - they may not be related at all... What do you think? Synchronicity or just plain coincidence?

Addendum: I wrote this last week and I'm just now posting it - the President was here last week.
Posted by Nancy at 10:33 AM

Well, it was ElectroTherm, and the CEO is John Fox. However, I am also a believer in synchronicity, and doubt randomness on any level. Whether or not the President visited your friend's company or not, the sensation that things are going to change may not have any connection to Obama's visit. And, my friend, your sense of synchronicity may have a completely different, yet accurate, relevance. Good for you for following your impulse. And good for us that you posted about it! EFH

Personally, I don't believe in coincidence..

Well, of course it's a synchro, it's just not clear of what to what, exactly. I sure hope these things are for real, it would make such a difference to so many of us.

what a great view you must have, by the way - i love watching planes!!!

A cool synchro! Nice to know that our president is looking into this kind of thing.

Synchronicoincidence! Wow! A once in a lifetime happening. We only heard about the presidents movements around here in the Bay area. My youngest daughter said they saw his entourage go down Freeway 280. They had to get off the road.

That's pretty cool. I definitely think a change is coming but I don't expect the current president will be leading the way.

Totally a synchro. And like Trish says..never any randomness. Would like to know more about the turbine as a heating unit. Pretty amazing stuff.

oh no, not a random moment at all! Whoaaaa!