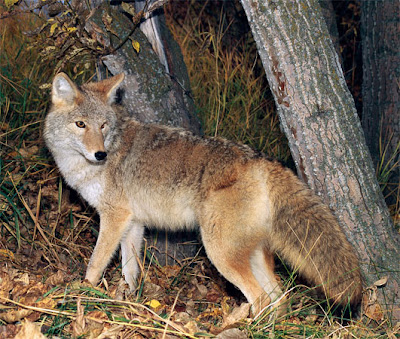 For the last couple of weeks Lucy has been waking us up every night barking (loudly) at the coyotes entering our yard in the dead of night. Their nightly visits might involve the rabbits flourishing out in the open areas around our house, or from the sounds of their barks, they may be trying to lure Lucy outside. My husband says they can mimic different animals. Anyway, Lucy is doing her best to protect us from these marauding invaders that have the audacity to leave droppings in the yard - right next to hers. It's caused quite the stir at 3:00 a.m., not to mention some serious heart palpitations. It has also become a bit old, night after night. Not to mention having to keep my eye on Lucy whenever she is out in the yard.

We thought it a good time to head out of town, up to Lake Tahoe, a mere 21 miles away.  As we are getting out of the car our neighbor comes out to remind us to take all food inside. He caught a black bear standing on his hind legs looking in his sunroof for a snack the other morning. 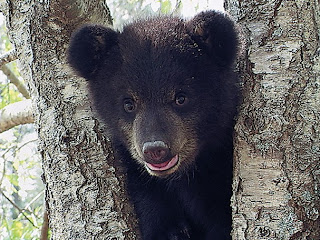 I didn't ask about the paint job.

I was reminded of a friend's story a few years ago. Some people they were camping with in Yosemite had their car completely torn apart over 3 gummy bears.

I keep the window open near our bed to hear the sound of the stream and thought we had made it through the night without incident when my husband reported this morning that Lucy had heard something outside last night, but considered it only growl worthy. 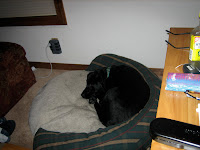 It's beginning to feel a little wild out there!
Posted by Nancy at 3:43 PM

wow. animals animals every where...have you tried talking to them...perhaps they are coming to you for a reason...smiles.

Please have you all a safe and good Sunday.

Funny! These animals must have some sort of message for you, Nancy, other than not leaving food around!

Wolves and bears. Yikes! Coyotes have moved into one of the biggest parks in the middle of the Houston. It has it's public areas and it's wild areas where the bayou runs along one edge. Oh and alligators too. there were, the last time I canoed down it, three 6' or 7' alligators.

What a blessing to have so many of God's animals visiting your home.
Would swap with you in a minute ♥

We have all kinds of critters in our back yard (that's because our back yard is 800,000 acres of National forest land, so we kind of expect that here). We get bears, coyotes, wolves, foxes, moose, deer, and everything else that lives in the northeastern US. But of all our visitors, the worst by FAR was the family of skunks that moved in under our back porch. Unfortunately, the cat found them before we did...ever try bathing a cat in tomoato juice? ...that was 2 years ago, and he STILL smells like a skunk. Ack.

Yikes! I definitely wouldn't let your dog out alone!

Well, just think what joy all that barking gives your dog. Ours do the same thing if they are awake but I'll tell you, they sleep through most things. I'm not even sure they'd hear a robber unless he were dropping the silverware.

Wow you certainly have your share of wildlife. That's amazing. We have coyotes in our local park too.. and they've been seen on our street at times. I've still never seen one, myself and I've lived here for 25 years.

I heard a report there was a little ground shaking going on a bit ago, up your way...maybe the animals have sensed that...and are a little overactive.

I think the wildlife is wonderful, too, until it begins to intrude into our sedate surroundings! I agree with the MacGregors that maybe there's a message in there for you. Wonderful pictures of our furry friends.

Maybe difficult with all the creatures Nancy but the photographs are astounding.

Incredible photographs Nancy! I can understand your being a little wary about so many wild visitors but agree with some of your commentors who think perhaps they're leaving you a message of some type.

It's amazing being so close to wildlife, co-existing close by. Not many people get to brush shoulders with nature like that.

Jill of All Trades said...

We live in the middle of our city and have foxes nearly every night. We also have tons of rabbits so the foxes are nicely fed.

Yikes! This sort of thing is exactly why I like living in town. No wildlife, alligators, or creepy crawlers, which is just fine with me! Great pics!

Nancy .. stick your head out that open nwindow an HOWL!!! LOL let them know one MEAN(smart, pretty, intelligent) animal already lives there!=)

I love being close to nature. But then, I'm a Bear; what would you expect?

Keeping a close eye on Lucy, and talking back to the wolves/coyotes are two safety precautions.

As for making friends with the Bears, well, there are a couple of schools of thought. Depends on how close you want to get to the Bears.