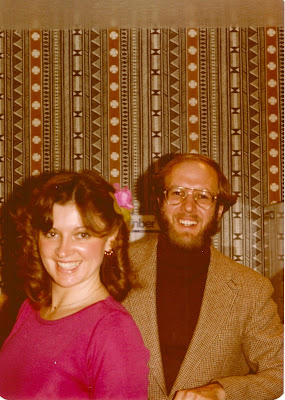 (My husband and I with our lives stretched out before us.)

A few weeks ago a dear friend died, leaving his wife of 45-years and a young, vibrant family behind. He died way too soon. His funeral was last week. Attending were a myriad of people, bits and pieces of his life throughout his lifespan.

He and I met while I was still riding my bike around the block - around 13 years old. Throughout the years we shared many memories, a lifetime of laughs, and a few tears. We've been a part of different groups of people, corresponding to whatever our interests were at the time. But throughout, we have remained friends. Separate, but somehow together.

As I've mentioned, a diverse group of people attended the funeral, but none more interesting than the group we were friends with at the beginning. The ones we were friends with while on the cusp of early adulthood. I had not seen many of these people for 40+ years. We literally lost touch for the bulk of our lives. We went from young and hot (a euphemism used by several), to grandparents in a blink of an eye. The middle years somehow cut from the whole, leaving bookends, instead of chapters.

We caught up on marriages, children, illnesses, and gossip. Was there really some question about the gun used in our friend's suicide 25 years ago? Could her husband have been the culprit? How is your sister? Did she ever marry that guy you hated? Seriously? They want to remove your entire colon? You talked to my ex-husband last week? I'm so sorry to hear about the death of your daughter....

On and on we tried to fill in the blanks. To match the face in front of us to the face we remembered. The twenty-something that had life stretching out before them, with everything still to come, to the face that has had its share of pain, strife, struggle, and joy. Grandchildren. Comparing numbers, you could see the pride we all shared in our little ones. Most were close to their own children and had good relationships with extended family. A few struggled with substance-abuse issues and one or two actually found themselves in really bad circumstances at some point in their lives. 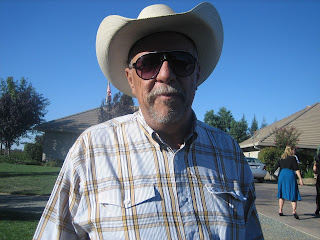 One thing stood out. None of us were unscathed. We all had something that we endured that put a wrinkle here or worry-line there. I guess that's what life is about. Dealing with the curve balls as best we can and enjoying the small things that life has to offer. Like old friends catching up on the years, sharing stories about the ones that are no longer at the table.

He would have loved every minute of it.

Very human, very honest, very moving and important posts like this, are the best use of the blogosphere! Thank you

Cloudia - How the years they do fly!

I missed this post last year. But I want to say your friend created this space for you all to come together again. It was his final gift to you.

37paddington - Yes, I think that is a great way to look at it.