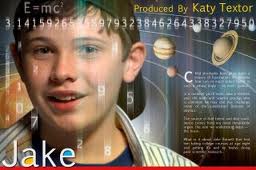 60 minutes did a segment on child prodigy, Jake Barnett. Jake is one in 10,000,000. Diagnosed with autism at age two, it was questionable whether or not he would ever go to college - let alone be a college honors sophomore at age 13! At age ten he taught himself high school math in just two weeks.

His gift is mathematics and science, and he has been attending college-level courses since age 8. What amazed me, from a developmental point of view, is that he came out of his autistic shell when given the opportunity to learn. It was age eight when he came home from school and asked his mother when would he learn something? That is when she started taking him to audit college courses where he would often join the conversations. It wasn't long before his genius became known to the professors and his life changed forever.

It was when he started talking about the Fourth Dimension, (which is what many believe is humanity's evolution - from third dimension to fourth dimension), that I sat up and took notice. Unfortunately, that part of the conversation was short.

The entire episode made me happy. I actually had tears in my eyes watching this beautiful young man get excited about helping people become less fearful of math. He is so fresh and sweet.

He, and others like him, are gifts to mankind.

If you would like to read the entire transcript go here.

I watched the segment on Jake, and it struck me the same way. We just never know who it is who will lead the way.

As for your milestone, thanks for being mayor of your village. It's a great place to visit.

I am with Brother Bruce on this. Saw the Jake interview, and saw/felt that there was much below that enthusiastic surface that the interview did not tap. Nevertheless, it is heartwarming to know souls like his are out there. And, by the way, souls like yours. Congratulations on this milestone, dear Nancy. EFH

FINE! Bruce and you Expat From Hell said it all just fine. I teared up the way you did, for this one. Congratulations. I'm thinking we are the winners of this particular milestone.

I've always been intrigued by the way the autistic brain works. It's unfortunate that more of them aren't like Jake - able to communicate with the outside world. So many of them are geniuses, but they just aren't able to translate what they see in their minds into words the rest of us can understand.

A few years ago I had a high functioning autistic boy in one of my physics classes. He could solve complex physics problems in his head and have the answer in seconds, problems that would take me 20 minutes or more to do on paper with the help of a calculator. And he wasn't just plugging numbers into a formula in his brain, these were complex problems that required multiple derived equations and a full understanding of the concepts and how they fit together. It was fascinating, and truly amazing to watch. And he could recite the first 500 digits of Pi from memory, forwards and backwards.

I wonder if autism is increasing because more children are evolving another realm of human existence. Jake certainly seems a breed apart. Thank you for sharing this with me. I learn so much from your posts, and I congratulate you on the milestone. :-)

great job on the 700 hundred posts...and so fascinating on the boy as well...would def have loved to hear more from him...

Congrats Nancy! I too saw this and was thrilled that he was able to break through the confusing world of autism and find a voice through mathematics. I also feel it is a real blessing for him to have the parents he does who remained aware enough to expose him to the very thing he needed. But as the interview continued I became lost in it as he spouted off numbers and my interest began to fade until he mentioned that he sees these equations and their probabilities in a forth dimension. I am an artist and very visual and get the idea of seeing an equation from all sides, although getting the concept and fully understanding it- well, math is not my thing. But I definitely was back into the interview wanting him to grab his dry erase board and marker and map out how it all comes together for him. But no such luck. Bummer. I did wonder the very same thing!

*On a side note: I am crazy, fascinated and enthralled with William Henry's ideas. They sound nutty, but you know - not really. I love art history and took many classes throughout college on the subject and still I am seeing things a bit differently after listening to his Coast to Coast interview. Once again I am looking at some of the ancient works he mentions and a large part of me wonders why and the heck didn't I see this before! Religion, just taking what I was told for granted, I don't know. Maybe the same effect is true now however, something sounds alarmingly sane about his interpretations.

So glad you turned me on to him. I wasn't aware of him before. Also I guess you didn't miss much it sounds like the aurora was hiding from most folks here in the U.S. Again - bummer.

What another wonderful little soul that God decided to share with us.
As it happens, my Little Noah was diagnosed yesterday as being Asperger's. Apparently the odds are 1:160, lucky me...I got 2:5. :)
The psych said yesterday that he has noticed that his little patients on the ASD spectrum are all SUPER intuitive.

Congratulations on your 700th post. I'm glad to have known you all this time and your blog has developed wonderfully.

This story was a great one to choose. Jake is terrific but I also must give many kudos to his parents for not giving up on him. It would have been so easy for him to have been lost forever but instead he can joke as well as do complex equations. My favorite was this one:

Safer: Any ambition to be an astronaut?

Jake Barnett: Not an astronaut. That's like too dangerous. I'm gonna be the guy controlling the astronauts. If anyone's an astronaut it's gonna be my brother.

How normal can you get?

Bruce - Thank goodness we have these children being born at this time in history - we certainly need them. Thanks for continuing to put up with my windy blog, Bruce! :-)

Expat - I agree - he had light just jumping out of his eyes! I thought how wonderful to love what you do so much... Thanks Expat, for also putting up with me. :-)

Jeannette - Thank you so much. You are all wonderful writers, so to have you want to read me is a great compliment.

Jeff - What if - and I know this is really "out there" - what if they are fourth dimensional beings and cannot relate to this three dimensional world once they get past infancy? What if all of the autistic children blossom at some point in our evolution? Then we will be the ones not relating so well with our third dimensional minds. Your student sounds exactly like the boy in the 60-minute segment!

DJan - Wow! Yes. They are actually doing the evolving of the other dimension....it makes sense. I think we have a wonderful sci-fi movie here, lol.

Brian - He was a joy to watch. Try and catch a rerun if you can, or go read the transcript. Amazing.

Cole - He had wonderful parents - both my husband and I noticed that right right away. They could tell that his demeanor changed when he was doing something he enjoyed and they played off that. Which leads me to wonder if that could happen with other autistic children - are they just waiting to have their genius exposed? As for William Henry - I just received his DVD and I downloaded his book onto my I-Pad. I know! He sounds crazy - but in an alarmingly sane way - you said it perfectly! Here is another interview with him and Whitley Streiber on Whitley's Dreamland - no need to be a member to listen to it:

Natalie - So sorry about your darling little Noah - but I still can't help but think these children are very special and someday we will know just how special. Could that super intuition be the key?

Susan - LOL! I LOVED that quote. He is such a normal 13-year old in so many ways. I agree, his parents made all the difference. I was happy to see they have opened a center for autistic children. Thank you so much for being such a great blogging friend over the last few years. I love the I have that you have created, and enjoy it every day. :-) (Still need to have the last one framed - will send a pic when I get it done.)

Pity we don't get "60 Minutes" outside of the US, that sounds like it would have been a fascinating episode! Child prodigies are always astonishing...