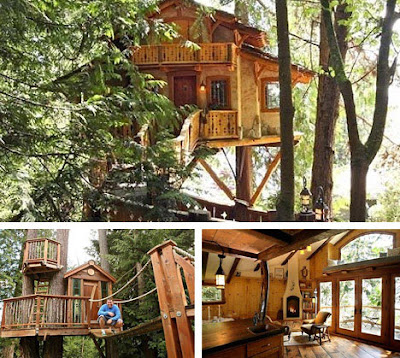 In the early years of my spiritual development I decided to try visualizing what I wanted to manifest. In those early days I wanted very much to evolve spiritually, but also had desires for material things, which is a very human trait.  Things such as houses. It was during that time when many people had the same desires, or our landscapes would not be peppered with McMansions.

At any rate, I had just read Shakti Gawain's "Creative Visualization" and decided to give it a try it by visualizing myself living in big beautiful homes. More than one. (I also had a desire to live in other places.) So I set about following Shakti's advice - putting myself into a calm, relaxed state and then visualizing myself walking through these homes, enjoying how pretty they were, feeling all the feelings one associates with being in beautiful surroundings. During this time living in something of this magnitude was very far from my realm of possibility. I was a stay-at-home mom attending college, living a very middle-class lifestyle, with a husband that had no desire to move. Nonetheless, I had my dreams... shallow as they were.
Cut to today.

I now live in a very lovely home that we are renting from people who obviously had the same dreams. It is my third lovely home in six years. The other two were homes that we owned and sold, as we moved around the country for my husband's job. We are renting this home because over the course of the last few years our furnishings grew. Otherwise, we would not be here. The people who own this house have moved to smaller digs as well. Obviously, they found the same thing we did - bigger is not necessarily better. But we both had to experience the contrast to learn that lesson. I think that may be what life is all about - experiencing contrasts to understand what is truly important to us.
My point?
Creative visualization works. Whether you come at it from a very pointed, conscious manner, or are unconscious and letting your energy create willy nilly, what you think about and put your energy into becomes your eventual reality. You are the driver of your own boat. People that are highly successful are putting their life force into creating whatever it is that they feel passionate about. Science is catching up with this concept. It is now believed by many that on a subatomic level the world is possibility. That by just observing - we can change a wave into a particle, or a particle into a wave. It is the expectation of the observer that actually affects the outcome.

I tell this story because I know that my living arrangements are a product of what I purposely manifested those many years ago. It takes time for the atoms and particles to arrange themselves into what we want. We are energy. We live in a world that is made up of energy. I believe we are living our "dream" world. Making sure that dream is the one you want to live is the challenge. After all, there is a time gap. Simply directing our thoughts to being grateful, kind, nonjudgmental and loving is a step in the right direction. After all, our physical desires may change, but wanting to live in peaceful harmony rarely does.
My new visualization? It is a small house - maybe a tree house (seriously) - living in a community of like-minded people who share the same values as I do for the environment, resources, and life in general. I spend time thinking about it, reading about other similar communities, and designing the concepts from a lifespan perspective. I put myself into calm relaxed states and walk through the neighborhood where everyone smiles and waves, because they are all my friends and family.


To be continued sometime in the future...
Posted by Nancy at 1:34 PM

Very cool. I would like to be your neighbor. Maybe I will visualize that.

I absolutely agree. I have just bought my little beach cabin.

I did, really did, imagine it up.

I had NO idea I would actually be able to do it...and do it I did. I don't even owe anything to anyone ...

Funny, I have been visualizing the SAME THING.

haven't given it up, though.

Thank you for reminding me of this. I do try to do visualization like this but there are times I forget due to being busy and unfocused. This is my much needed encouragement to get back into this practice. XX

Neuroscientists say that visualization works because it focuses consciousness towards the intended goal. It's the same phenomena as when you get a new car then suddenly notice everyone has the same make and model. When you set a goal, your consciousness scans for anything that could make that intention come true.

I do think thoughts are power, but my only problem with Shakti Gawain and others is that everyone else is putting their thoughts and energy out into the world. And then there's the fact of mysterious forces we actually can not understand.

For myself, I haven't always found the process clear cut. I do believe in praying and visualizing what I want, but also have found that surrendering to what IS helps keep me from feeling disappointed when things don't turn out like I had hoped.

Bruce - Sure - you could have the treehouse next door.

Sarah - Congratulations! I must drop by to take a look. I do believe it works - eventually.

Jen - I could see you in the hood.

Teresa - Not all of mine have come true, either. But I think all of the ones that I spent time visualizing, then letting go of the outcome, came true - but not always as expected.

Lori - I think living in the Now, and being mindful of what we are doing throughout our day is actually creative visualization.

it really does work..i agree...but def thanks for the reminder...and what a cool house in those pics...visualizing that now...smiles.

I agree...thoughts do become things. And of course the "belief" that your visualization will manifest itself.

Freeman Dyson hypothesized a genetically-engineered plant, (resembling a tree) capable of growing in a comet. He suggested that such plants could produce a breathable atmosphere within hollow spaces in the comet (or even within the plants themselves) utilising solar energy and cometary materials, thus providing self-sustaining habitats for humanity in the outer solar system.

I'm working on visualizing living in a dyson tree. I promise if it works out I'll let you and some other friends know.

great post, nancy. i have seen this at work in my own life, too. but as a mother i have a question. does it also work if we visualize for our children? and does that circumvent their ability to create their own possibilities?

a very thought-provoking post[as always, my dear] and so you are happy with your current situation, i presume? i was hoping so and assuming so...

isn't it strange to imagine we are all energy all the way down to the subatomic level where we connect with all energy everywhere, inside, outside, WAY- out- there energy...we are the energy of the chair that supports us, the bed that holds us while we sleep, the food we eat, the water, everything and YES, it blows me away...

when i could see through my beloved teacher, was the day i truly believed it was true...i was seeing BETWEEN the atoms that he and everything is. and i have never said that online and may regret it but..tis true.

This is it! A community of tree houses. Honestly, why not??

I realize that all of my visualization have become reality, in the same way as yours. And I am happy to be where I am today, with little desire to change it. So glad you are where you wanted to me, now that tree house will be a fun place to blog from! :-)

I like this concept of visualizing. I keep hearing more and more about it but have never actually tried it for myself. Maybe it's about time..

What a wonderful house! I can certainly visualize that. And the community which goes with it.

I'm a big believer in "your thoughts create your reality." That's part of why I try to avoid some of the negativity that's so often floating around.

I think about a close knit community, filled with people I share common relationships and common beliefs with. Kind of like a neighborhood where I really like all of my neighbors. I need to work on my visualization. I also dream of a home in which only one of my children wears diapers...I'm gonna go visualize that now!

I am still waiting for someone to realise that a big house doesn't necessarily mean big things.
Shove over, I am gonna have that little tree house right down the back (with the ocean views). :)

luksky - I think the most important part of the visualization is letting go of the outcome.

susan - How cool - a living organism to live in - outer space. As for the dyson tree - that is exactly what I had in mind.

Angela - Good question. I think our children have their own path and I'm not sure that what we want for them is always in their best interest. Does that make sense? The movie I talked about earlier this week discussed soul groups and how they come together to help each other learn whatever we came here to learn. So to answer to your question? I think we can nudge things in a certain direction, but for the most part they are powerful entities learning in earth school through drama and contrast.

linda - I have absolutely do doubt you have that ability. I think we are, and everything in our world is, vibrating particles creating mass. BTW, thanks for asking, and yes I am happy. I think happiness is a state of mind and not where you live, but living in a tree would be just plain fun.

DJan - A seriously fun place to blog from!

Hilary - A big part of the concept is visualizing what you would like, in fine detail, and then letting go of the outcome. Forgetting about it.

Rob-bear - Bears love hollowed out trees to hibernate in - this is right up your alley!

Whitney - LOL! Yeah, I can see why you might want to visualize not having both in diapers.

I think that you are absolutely right about "creative visualization". Most people do not even realize the power that their thoughts have on their reality. Love that tree house!

Hi Nancy, sorry I haven't commented in a while, but I visit. I had to comment on this though because I truly believe in this. I truly believe that we make our lives what they are. If you want things to be different, then you have to think different. So many people blame others for their lot and always talk and feel a victim. And they will be as long as they think that. We are what we think!

After living in a 400 square foot trailer for almost 6 years, I've learned that bigger is certainly not better. But I would like a SOMEWHAT bigger living space! Those tree houses look really cool, except in a storm, since I am TERRIFIED of storms!