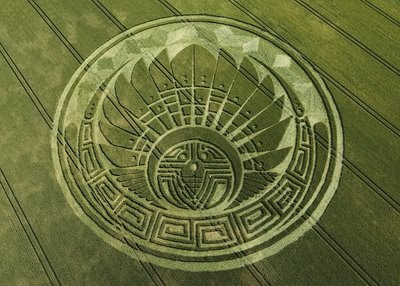 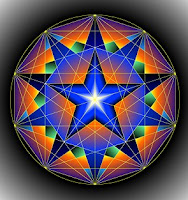 I recently ordered the new crop circle movie "What In The World?" produced by Suzanne Taylor. I haven't watched it yet, so this post is just about my wonderment at such an incredible phenomenon going on in our world. Is this some kind of communication? Other than the two old guys in England who made a couple of the crude ones, and some others that have done them to advertise products, etc., they are a true mystery. Mention of them have surfaced in academic texts from as far back as the 17th century, so they are not new.

What are the white orbs that eye witnesses have seen in and around the circles? Is it geometry? Is it sacred geometry?

What does it mean?

To listen to an in depth interview with the producer go to Regina's Cantina here.
Posted by Nancy at 1:01 PM

It sounds and looks fascinating.

I think it is time we opened our minds and hearts to some 'far out' possibilities. IT is not going away, no matter how much we hide under the blankets.

really cool...i admit i am a bit fascinated...

Impossible not to be fascinated and curious and somehow pleased that we don't know everything!

We watched it last spring and I enjoyed most of it. I think the film would have been better and more convincing had they just shown the magnificent circles with musical accompaniment and left the people and their attempted explanations out of it.

There is much that happens around us that we do not see, so many wonderful Beings that share our Universe.....I adore the crop circles, the messages are in the sacred symbols,understanding this is not important,as simply seeing their beauty will infuse the meaning into your Soul...our hearts will feel the message of their gifts ♥

Cool! I'd like to see that movie. I thougth crop circles were just circles - nothing more. Now know differently! Thanks for sharing.

I'm interested. I know my husband would be, too.

Nancy, I agree that these are amazing creations. You might be interested in this response from the spirit guides to a question about crop circles on our Dialogue with Spirit Guides blog. see it here:
http://www.circleswithincircles.com/?p=2247
I look forward to the movie and photos of these beautiful designs.

There is so much we do not understand about our universe. So beautiful! I would love to stand in the middle of one of these works of art to feel the energy.

I've always been fascinated with crop circles and other, similar phenomenon... and keep an open mind about it all.

So much to delight and astound us. Let us know about the movie when you watch it. Gorgeous circle pictured!

I do find them very interesting!

I spent a long afternoon at the pub in Wiltshire County where the crop circle guys hang out. You know there are more than the two old guys making them, yes?

They are so very amazing, especially the aerial photos. Beautiful! I love the chalk horses on the hillsides as well.

This world is so full of wonders!

I'll have to try to see this movie. I would be very interested in learning more about these. I'm even amazed when I'm in a plane and look down over farming country and the way just regular crop circles look from the sky.

I'll have to try to see this movie. I would be very interested in learning more about these. I'm even amazed when I'm in a plane and look down over farming country and the way just regular crop circles look from the sky.

Can't wait to see this! I'm intrigued by crop circles.

You come up with the most interesting topics. Such beauty in these circles. Such incredible work. I'll look for the film.

oh, me, too, on being totally smitten with the magic and mystery of crop circles! and no matter anything else at all, in the least, they are magnificent works of art, to me! ;)

This is completely fascinating to me. I've flown over some of these. I am going to put this movie in my queue now. Thank you Nancy for the reminder.

I hear about these from time to time. They are absolutely gorgeous, aren't they? There's something so engaging about them.