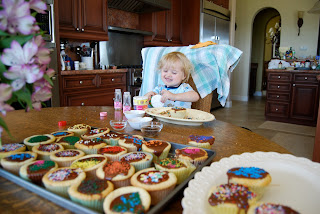 The house is already too quiet. Order has been restored.

The refrigerator is too full of all the things I wanted to cook in the short amount of time that they were here. The kleenex and television remote fished from under the couch. The frosting wiped from the back of the chair.

My grandson is gone.

His mother took full advantage of having grandparents to babysit, however. Several play dates with old high school friends gave her the respite from motherhood so desired in this life stage. She mentioned that the friends she grew up with also have the ability to keep her laughing. They've had years of helping her create a shared sense of humor, after all. She started kindergarten with most of them.

So quiet it will be for another few days. 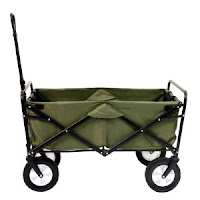 Then the vegetarian cookbooks come out for my youngest daughter, who is currently obsessed with finding a puppy. At twenty-three she doesn't believe me when I tell her the desire to nurture a puppy is often a precursor for wanting a baby. She doesn't draw the correlation. But that doesn't stop her from wishing she could have a "puppy shower" for needed puppy accouterments such as a puppy stroller - so needed when puppy needs a nap, or "has had too much sand," she says.

And can also be used for transporting stuff at music festivals, of course.
Posted by Nancy at 7:41 PM

Don't get used to the quiet just yet.

A lovely post straight from your heart, I have missed my visits ♥

Oh my, how amazing! A stroller for pups! Yes, I tend to interpret her yearnings the way you do, too, Nancy. She does sound like she'd be a wonderful mom...

smiles. just catch your breath...it will not be quiet again soon.

Jill of All Trades said...

Quiet, afraid I'm getting too used to it. No grandkids yet so it may a big adjustment whenever they grace my life.

I think it's wonderful to have a chance to give two generations the pleasure of your company. I think it's also just a short respite from the beginnings of grandparenthood. Wonderful post, Nancy. Looks like you are all moved in...

LOL...I have never had a puppy that would sit in a stroller. Never. Or a baby, either, now that I think of it.....Enjoy!

Oh how those grandlittles tug at our heart strings! I have a two day visit scheduled at the end of August with mine and can't wait for the mess!

I'm sort of enjoying the quiet but I do miss those g'kids.

A puppy stroller?!!! Oh, dear. I liked the last line of this--sums your daughter up well. So, relax. And hide your shoes ;)

Cloudia - Gran is drinking her coffee this morning without any interruptions. Kinda sad...

lakeviewer - We have one more weekend of entertainment, you're right about that.

Gemel - Missed you, too!

Deborah - LOL! Yes, she will be - to pup, or eventually, maybe even a baby.

Leah - LOL! Yeah, but she doesn't see how that might equate to a human baby...

Jill - We do get used to the quiet!

DJan - It was a terrific couple of days.

Good Cook - It is such fun. I miss his little smiling face in the morning. Children wake up ready for the day!

Ellen - Quiet is good, I admit. G'kids are better.

haha! funny to hear where your grandson 'hid' things like the remote! at least you didn't have to retrieve a grilled cheese sandwich from the vcr (which we used in the old days, before dvr's!!)

Nancy, You obviously had a glorious time and I'm extremely jealous. I am gloating though because "the Eliot" will be here in early September for 3 whole nights! We are scrambling to move harmful things (mainly cacti!) out of traffic areas.

On a side note, do you Skype? We've been doing it now for a few weeks and it's a great way to stay in touch. Eliot is 17 months young - so he's enthusiastic about showing us parts of his anatomy (especially his belly button) - he even said "wub you" the other night. I could have, actually I did, swoon!

Life is like echoes of laughter in an empty room.

I don't know if I've ever heard getting a puppy is a "precursor for wanting a baby" but it could be, I guess. I had a dog when I was single but I did not like children and definitely didn't want any back then so I am a bit skeptical. Just make sure you don't end up with the puppy. That's the usually plot ending.

Just think of it as a reprieve till the next visitor!

A puppy stroller? Never heard of such a thing! As long as there are multiple uses for it, sounds like a good idea!

Don't they wreak havoc! But the sweet memories of the visit are still with you when you're cleaning up!

Amanda - Actually he was really easy on my house, in general! Surprisingly enough, we didn't have to move any of the breakables.

Amy - Yes, we do have skype, but don't use it nearly often enough. I would have, and probably did, swoon to hear "wub you", too! Grand Littles are the best!

California - My daughter says the same thing. But when we're single we want a dog to nurture - which eventually turns into wanting a human to nurture. At least that's my theory, LOL! You do have children now, so there could be some support for my theory...

alaine - So true! I heard his little voice all day today, in my mind. I already miss his busy little body.

Great photo of your little man, and those cupcakes look fab! I agree with you on the puppy theory. I had a poodle for 5 years before I had kids and believe me, he helped to prepare me for a baby! Don't know about the puppy stroller though. lol

Marguerite - I think dogs (or cats) can be our "first born." Our furry children. I think having the stroller be multi-purpose is a good idea in this case. :-)

Nancy dont tell her about "puppy pampers" That will seal it!! =0I

A puppy shower? Wow. That's a new one for me.

A few days of quiet are always a great thing. Enjoy the silence!!

Respite time - and then activity and frenetic energy again!

Trish & Rob - Exactly! Sister and family for dinner tomorrow night when youngest arrives. By Monday - it'll get quiet again. It's worth it to have them home if only for two days - right?

You guys have everything over there!

I'm coming over, what time is dinner?

You are right about us wanting breaks at this stage. I've found that even a couple of hours away from my kids is enough to replenish my stores of patience and cause me to miss them.

I'm sure you're right about the puppy. We got one and then moved onto kids a mere 2 years later...I'm sure you'll resist saying "I told you so" in a couple of years. You'll be too thrilled to have more children to love.

I can relate to the overly full frig and the "withdrawal" pangs ...