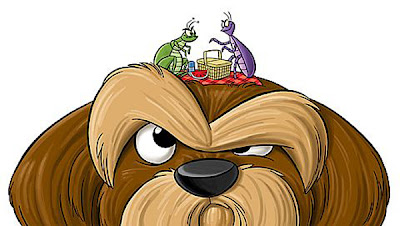 When all is said and done, I think fleas are going to inherit the earth.

My daughter has only been in her apartment for three months and is now living with friends as she tries to find a place with hardwood floors. Why, you say? Why is she going to great expense, not to mention the time and energy it takes to move, so soon?  She has asthma. Places with carpet are turning out to be very unhealthy for her. Especially if those places have problems with pests.

She signed a lease that had a disclaimer stating that there were no "pests" in the apartment. Being young, she signed the lease. She hadn't noticed any pests during the tour, after all. What she thought she might see would be a mouse, or spiders, certainly not fleas.


But it wasn't long before her cat was infested with them. They were all over the carpet. She dipped her cat, put a collar on her, cleaned the apartment floors, used over the counter pesticides, had an exterminator come in, but eventually the fleas literally made her cat (age 13) so sick, she had to be put to sleep.


She has found them in her bed, on her boyfriend, all over the carpet, and the last straw was her puppy (despite Advantage). She has moved out, and after giving 30-days notice, she has vacated the apartment. Now they want to hold her to the one-year lease with one-month's rent as her default. We're thinking - why exactly do you have that disclaimer in your lease? Have you had this problem before? Maybe in that very apartment? And since you have that disclaimer, how do you know there were no pests living there?


At any rate, paying for two places for the 30 days is fine - but another month to get out of a lease for an apartment that is uninhabitable seems a little over the top. They need to pull the carpet from that apartment and replace it. Evidently it's the eggs that you can't see, and can't get rid of.

Eweeee...I can imagine the frustration over all that work to get it clean and then the sadness over having to put her cat to sleep. Is it possible for her to report the landlords. They should have had to do something like pull up the carpet and put in new. I would say that contract is null and void if they didn't keep up their end of the contract. But, what do I know? :) I am very thankful that I don't have to share my home with fleas either. :)

Oooh--I can sympathize. We're dealing with fleas in our place, too. Came in with the cats, who wander around outside sometimes. Frontline has never worked for us--but Advantage is great stuff. You can only get it at the vet's, though. We have hardwood floors, so I know we'll get rid of them, as we have in the past, but they're sure a nuisance in the meantime.

Lori - It has been a nightmare!

Lynn - I think it was Advantage because she did get it at the vet. The key is the hardwood floors, I think. Wow, who knew fleas were so insidious? My daughter says you can see them jumping off the cats in the complex. Poor things.

I love my hardwood floors. the first thing we did when we bought the country house was pull up all the carpet.

Sorry to hear about your daughter's woes. There ought to be some sort of protection for individuals that sign a lease especially when the apt can't or won't take care of a problem.

ack. was in a house with a fam yesterday that had them...felt them on my legs...and took a shower as soon as i got home...

We've got plenty of these critters in Florida. What often works is borax - sprinkle it everywhere. The fleas smother in it. Then vacuum it all up. But this sounds like a genuine infestation!

Ewww! I think they knew about them, and there is no way to prove that they didn't come in with her own animals, so they knew if she signed it, they were home free. It sounds a little suspicious to me. I wonder if they knew...

Oh no! I hate the buggers, hard to get rid of.

Ellen - Hard floors are the only thing for someone with allergies.

Brian - Gross! I am so glad they are not where we live. I don't think I would have an animal in the house if we did.

T & R - It is! She has completely vacated the premises.

lakeviewer - They need to get rid of the carpeting, for one thing. But it's a big complex and they want to do the absolute minimum. It is just so suspicious that this happens and they had her sign a disclaimer that there were no pests in the apartment...

Her cat had to be put down!!!!! I would want to sue them!I would think that they would have to somehow prove there were no pests. Just because she signed that she didn't actually see them doesn't make it so. My animals had never had fleas until I brought them home on my clothes from the vet. We don't have carpet and it still took forever to get rid of them.

This is just wrong, they have taken advantage of her and I know it makes you so mad!

So sad that her cat had to be put down; how it must have suffered. I remember a time years ago in a house with shagpile carpet and we had two cats. We had an awful time but got rid of them somehow.

Our grandson had asthma and his health improved greatly when they de-carpeted.

Hope all this gets worked out quickly...what a bummer. Poor kitty.

Kathy - I am beyond mortified!

alaine - Hardwood is the only way, I think, for her to be healthy. And the sadness I feel for a pet we had for 13 years...

maggie - We are hoping to find a place without carpet.

Why didnt your daughter try advantage for her cat? It is less toxic than dipping and it destroys the flea cycle. Within a week all fleas are gone off the animal and in the carpet. I have 3 cats and a dog and they are all indoor/outdoor animals. Advantage works so well that I only treat them ONCE during the summer, and sometimes we have been able to skip a year because we are lucky not to get a flea. This is hard to do if you walk your dog anywhere, they will pick one up off the grass anywhere.

Sad to say but if your daughter had a cat and a dog, her landlord would not likely be liable for the fleas unless she could prove that her animals did not have fleas when they moved there and that they never went outside. I dont know how she could prove that.

Seems odd that even though her dog was treated with advantage, they still had fleas. I have never had to treat my carpets at all and we dont have fleas. If there are eggs on the carpet, they do get vaccuumed up, at least some of them. Sounds like the infestation just got too huge.

Our neighbors daughter has asthma and they recently put in hardwood floors and it helps.

Yuck! So sorry to hear about the flea problem.

Up in the northern part of North America, bed bugs are starting to become a serious problem in a lot of places. Partly climate change; partly less use of effective insecticides.

Flea infestations have to be treated every 2 weeks, according to my vet (and thank my fleas are outside). I seriously think this should go to court; no way she should have to pay for something not of her making.

Oh yeah ... fleas. Little bastards. But it's not their fault your daughter had this trouble. The landlords!! JERKS! Of course they knew. I hope she hires a lawyer. She shouldn't have to pay them one cent.

Ugh. I have a bedbug phobia now. I can't even watch the news.

That's a horrible thing to have to deal with and poor kitty! how awful for her. I think you're right in that the carpet has to go. Once you get fleas in there it is very hard to get rid of them.Your daughter is facing a bit challenge!
Blessings, Star

Nancy - The cat had never had fleas, and because she was up in age, my little hippie daughter thought she would never need the Advantage. {{wrong!}} She grew up in a place where fleas do not exist. Needless to say, she wishes she had used Advantage from the beginning. But I do believe they were in the carpet before she moved in. It was terrible how they infected the cat.

I had a problem like this in England - but it was mice. Anyway, carpets are awful for health. A good floor is a stone floor. We had a wooden one and, at a certain time, it started getting rotten and we had to replace it. Of course, the landlord didn't pay a dime. He even kept money from the deposit. For repairs. Shameless.

oh good heavens, that is awful! I'm sorry for her and her cat - what a dreadful reason to have to put a cat down. This reminds me of an article I just read about a couple whose house became infested with bedbugs - a similar tale of frustration, annoyance and expense trying to get rid of something that propogates like crazy and makes a life miserable.

Ugh! Luckily we haven't had flea problems with the girls.

That sure sounds like a set up to me. I feel so bad about her cat! Maybe she can contact the local news station. Don't they have something called "Action on your side" or something similar to help out the everyday person with a problem?

I was reading in a recent New Yorker that bed bugs are infesting everything now too. I wanted to travel this summer, but I think I will stay home and have a "staycation" instead.

that's really gross -- and so sad about your daughter's cat.

now i hear that there's a bedbug infestation in nyc of all places!

I recall one particularly bad summer in RI when everybody we worked with had flea infestations in their homes - including a number of the doctors and people who didn't have pets. They can just hop on your clothes and hop off inside. Yuck. I'm so sorry to hear your daughter lost a beloved pet to something the landlord could have had fixed before she moved in.

I HATE fleas. My cats were all indoor cats and never had fleas until we moved into our second house. The basement (bare concrete floors) was infested with fleas so bad that when I went down there, I could see them jumping onto my legs. I learned that fleas can go into hibernation for extended periods, and suddenly activate when warm bodies enter their environment. They are horrible and I am extremely allergic to them. I feel for your daughter and the sad loss of her cat.